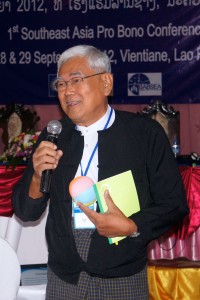 U Hla Ko (B.A. R.L., Diploma in Business Law) Mandalay, Myanmar
U Hla Ko has extensive judicial experience. From 1967 to 1975, he served in the roles of an Additional Township Magistrate, Township Judge and Magistrate and Judicial Officer. From 1976 to 1982, he was a Higher Grade Pleader, and in 1982 also served as a Supreme Court advocate. From 1995 to 2002, he was the Vice President of the Myanmar Anti-Narcotic Association for the Mandalay Region. He was the President of the Mandalay Bar Association from 2010 to 2012, and is now a member of the Mandalay Bar Association. Mr. Ko is the Chairman of the Myanmar Legal Aid Network, and the President of the Mahasi Meditation Center in Mandalay.
Mr. Ko founded the Mandalay Law Firm in 1998, which trains over 300 Higher Grade Pleaders and aims to develop capacity for young lawyers. The Mandalay Law Firm also provides a legal consultancy service. He has also published several works, including books on the Applied Court Fee Act and Suit Valuation Act, the Applied Limitation Act, Gambling Law, a Digest of Myanmar Rulings (Criminal and Civil, from 1986 to 1995), and immigration law.